Recently my Honeywell HVAC fan coil unit stopped outputting heat and instead produced a loud and repetitive banging noise. This is not the first time it happened and paying for a repair is not cheap, so I decided to figure it out myself and save hundreds of dollars. I’ll teach you how to do the same repair.

When I say you’ll save hundreds, I literally mean that. I was quoted $316 CAD for a 5-minute job! The cost to do this myself was $69.38 CAD which is the price of a new actuator.

Anyway, having gone through this before, I knew that the banging sound meant the actuator was broken or nearing its death. To confirm this I opened the HVAC access panel and saw the actuator’s tab moving up and down over and over. The bang is probably caused by the water flowing into the valve, which is partially opening and closing.

I’m going to walk you through the steps to fix this because I did extensive searching and wasn’t able to find any tutorials on the web or any videos on YouTube for this specific setup. I’m working with a Honeywell VC Series with a 2-position hydronic valve. The actuator is a VC8111-11. These steps should apply to any VC2, VC4, VC60 or VC8 series 2-position actuators, but your mileage may vary. Consult the actuator manual and verify that your actuator is in the list. It’s also a good idea to read over the manual.

Confirm that your actuator is in a stuck position by opening the fan coil panel and observing the actuator when your system is running and should be blowing out hot/cold air. Don’t touch anything, just observe. If it’s moving up and down and producing a sound then chances are you can fix it following this guide. If the actuator doesn’t move when your heat/AC is active, or you notice water leaks from the valve then it may be the VC valve cartridge that needs replacing (or some other issue). You should NOT attempt to repair the valve yourself since it may require draining, venting, soldering, etc. If in doubt at all, call a professional.

If you happen to have two HVAC systems in your home and both use identical components then you can do an experiment to see if the actuator is truly broken. Only do this if you’re comfortable with disconnecting a working system. Follow the guide below and remove both the broken and working actuators. Now install the working actuator to where the broken one was. Turn on the unit and see if you get your hot/cold air. If not then the problem may be your valve cartridge or some other component. You can also try re-installing the supposedly broken actuator and see if that fixes things. I was able to get another two weeks of life out of mine just by resetting it.

If you determine that the actuator is broken then note down the model number. You’ll need to buy a replacement with the exact same specifications. The actuator I replaced was a VC8111-02, which seems to be a discontinued model. However, the VC8111-11 has the exact same specs so I bought that. On the side of the actuator, you’ll see a label for wiring. It will say either SPST or SPDT. Make sure your replacement has the same type. I found my part on build.ca for $61.40 CAD as of Feb 2019. It took two days to ship with no shipping cost. The VC8111-11 part I needed can be purchased here.

Here’s a picture of the part I was replacing: 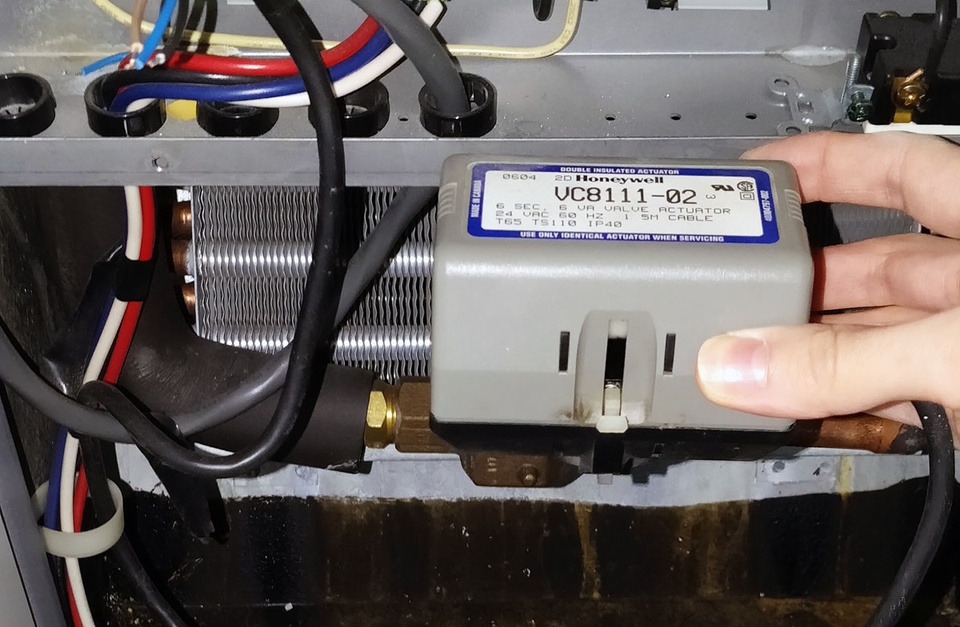 Here’s the side label showing that it’s an SPST type:

And here is the new part: 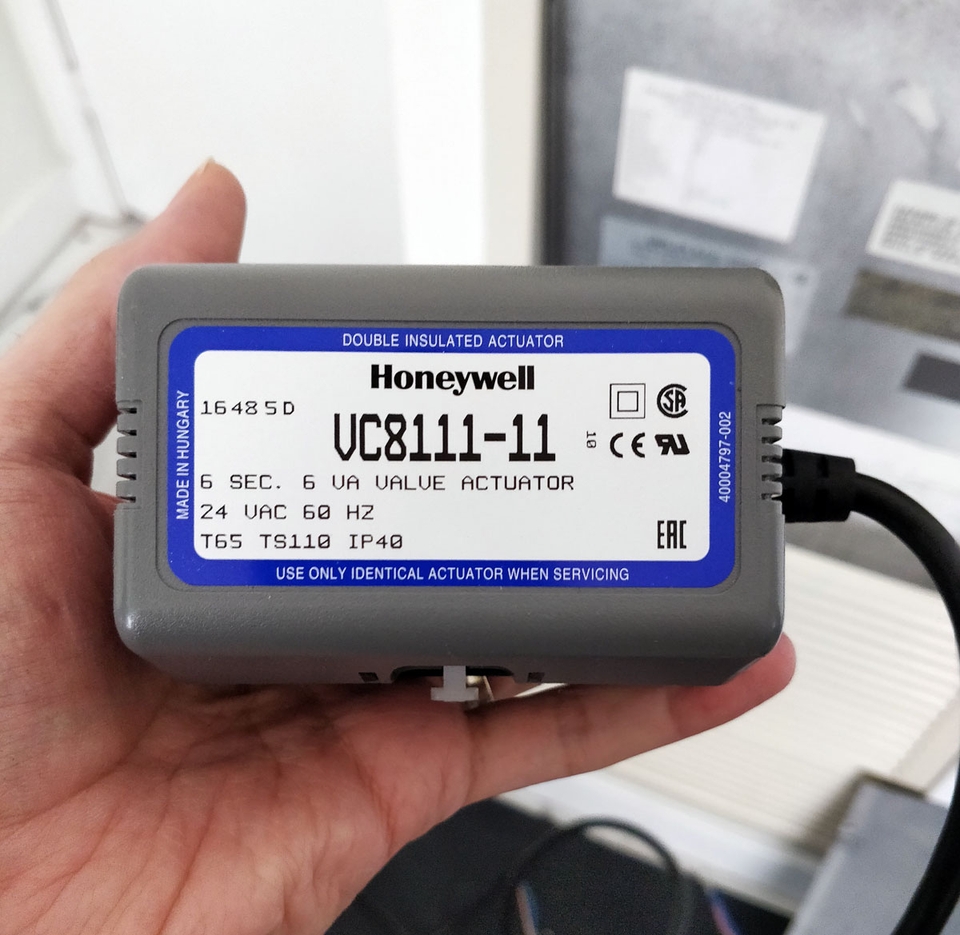 These are the only tools I needed for the repair: 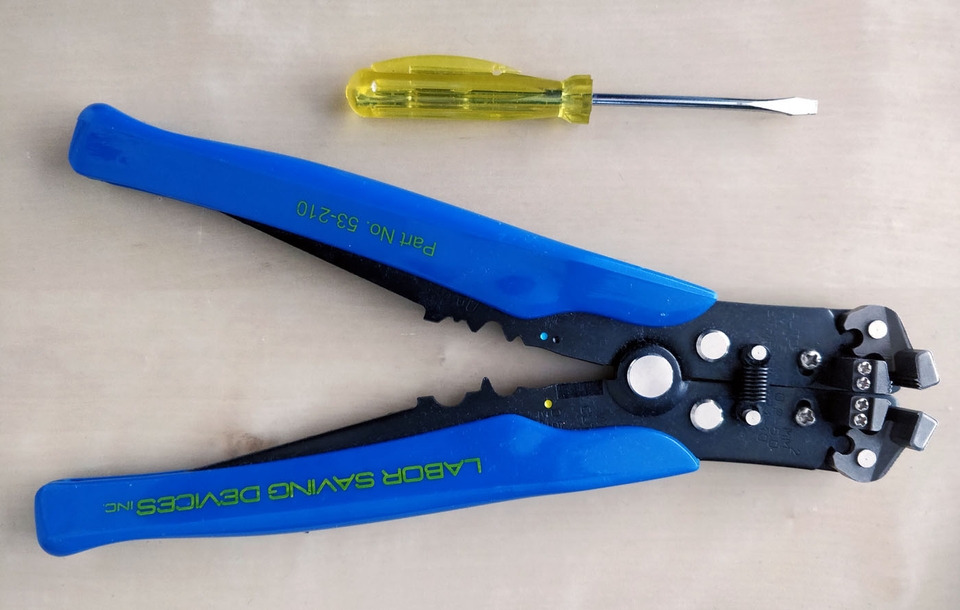 With the power turned off, you’ll start by disconnecting the actuator’s power line. You should have a power panel of some type near the valve. This houses the HVAC electronics. Mine looks like this without the cover: 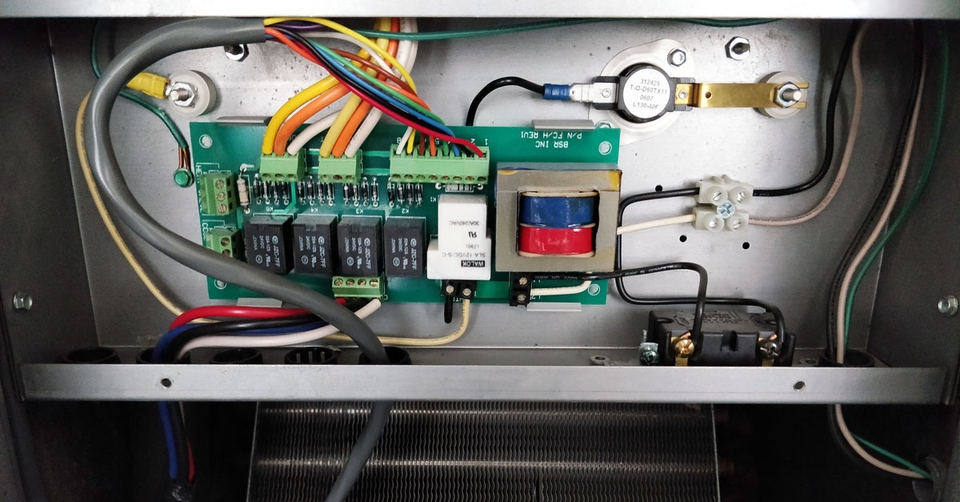 Open up your panel and then follow the power cable coming out of the actuator. You’re going to be disconnecting those wires, but first, you need to note down the order of the colours. Mine goes blue, black, tan. Write down your order because you’ll need to install the new wires the exact same way. Here’s a picture of mine with the wires still connected:

My wires are fed into some type of socket with three screws that clamp down to hold them in place. If you have the same thing then use a screwdriver to loosen the holds and then gently remove the wires. Here’s mine with the wires disconnected: 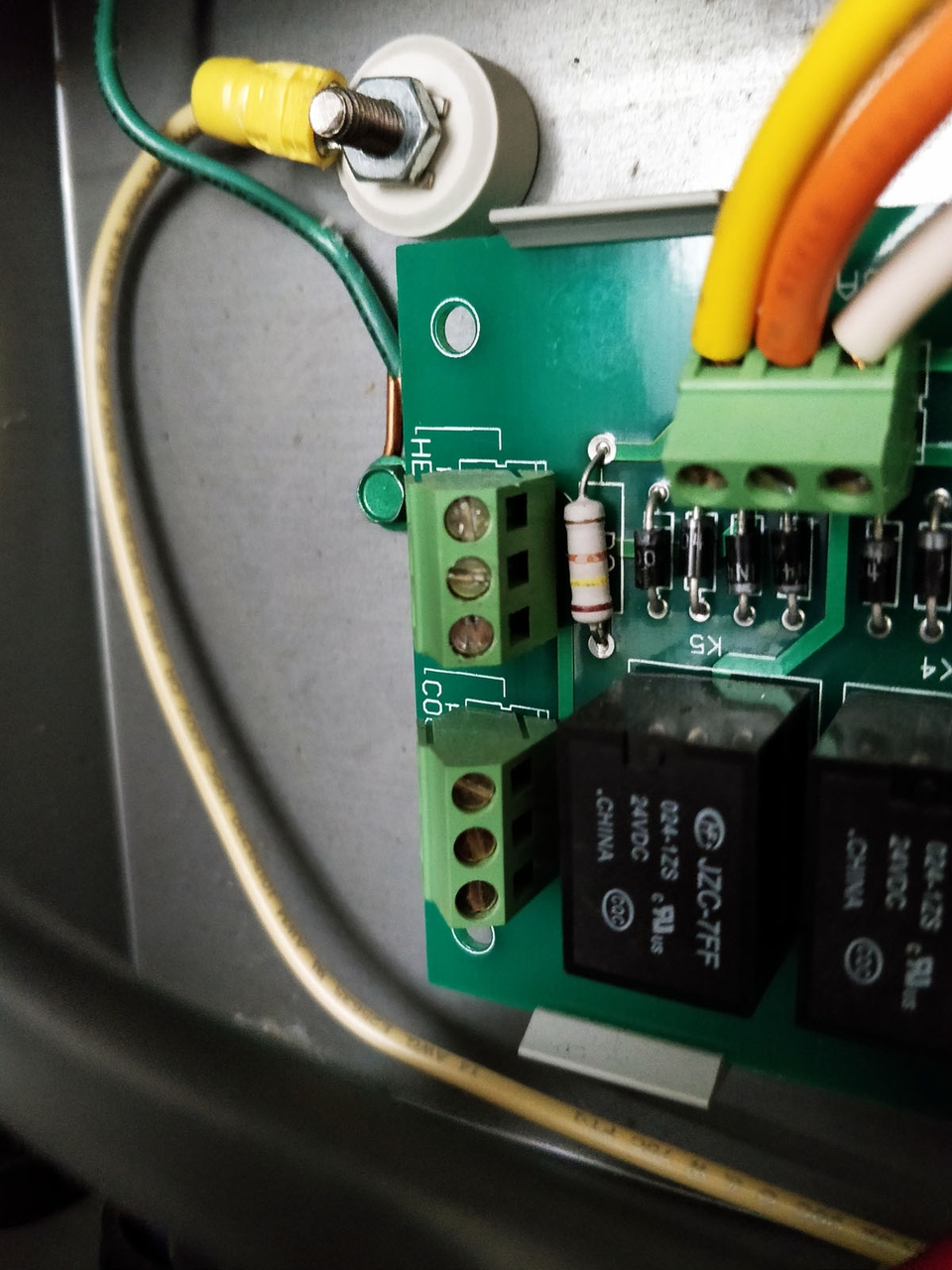 Now you can disconnect the actuator from the valve. There’s a small grey button on the bottom of the actuator. You can see it in this photo:

You want to press and hold that, then turn the actuator counter-clockwise to unlatch it from the valve. It should lift off after a 45-degree turn. It’s possible that you’ll need to turn clockwise on your setup. Here’s a video of me disconnecting my actuator:

This is what my setup looks like with the actuator removed (note that the spring looking piece extending out of the valve is the VC valve cartridge: 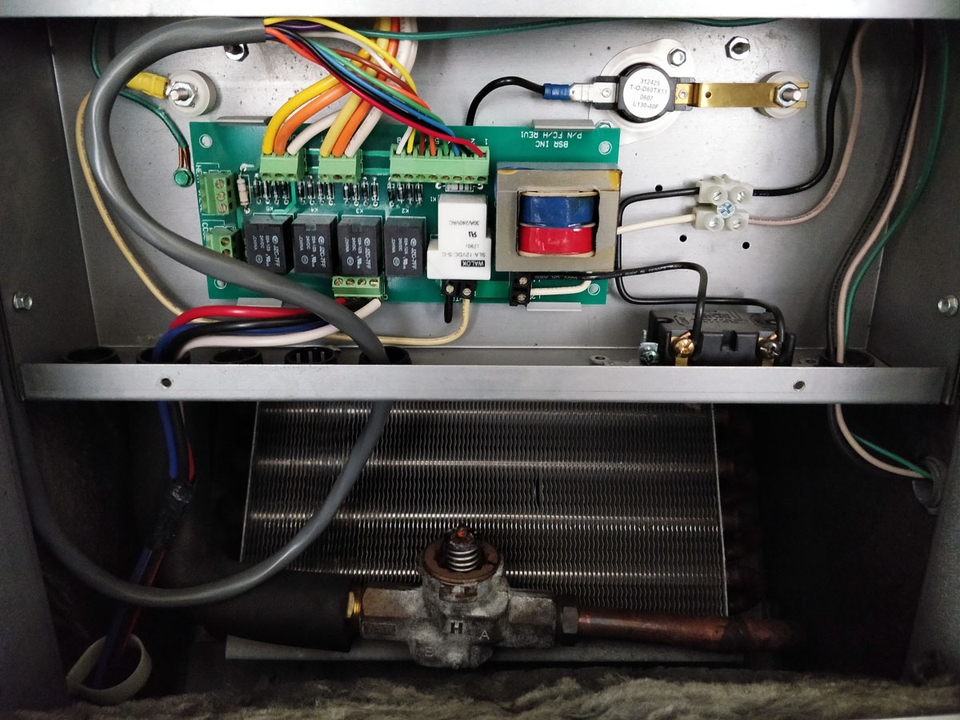 Here is a photo showing the old and new actuator. The broken one has been through a lot over the years… 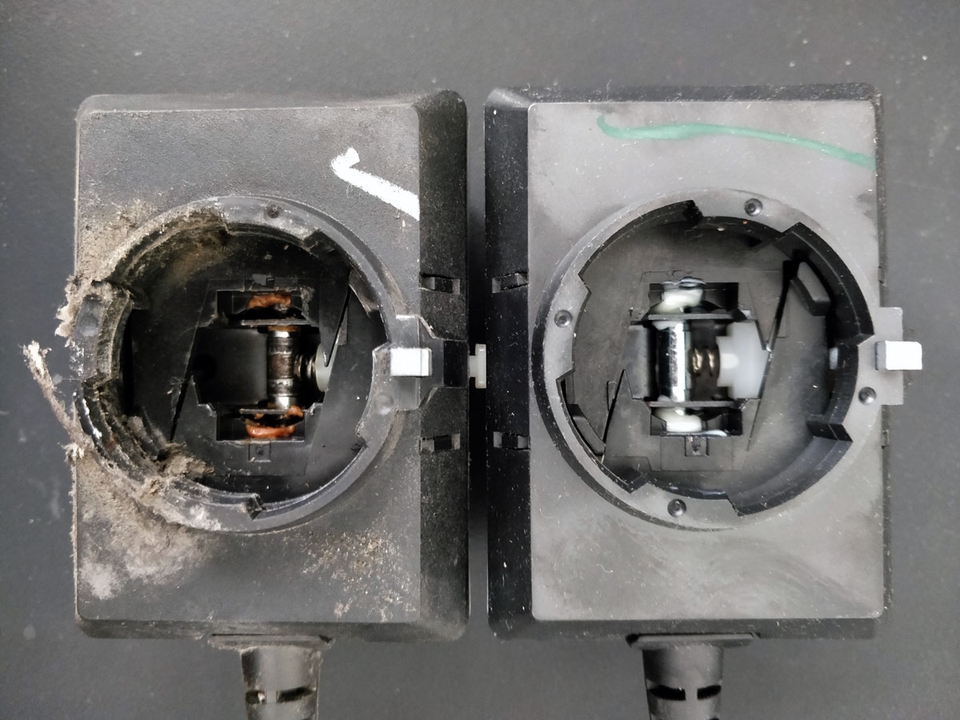 Connecting the actuator is just as simple as removing it. First, the bottom tab with the valve stem (i.e. the exact same spot you lifted off the actuator); apply slight downward pressure on the actuator body; turn the opposite way from the removal step. It should automatically latch on after a 45-degree turn. Here’s a video of me connecting the new actuator:

The last step is to install the power cable. Inspect the wires from the new actuator and compare the exposed wire length to the broken actuator. You want the exposed tips to be the same length. Mine was too long out-of-the-box so I trimmed them with wire cutters. You can probably snip them with scissors too. 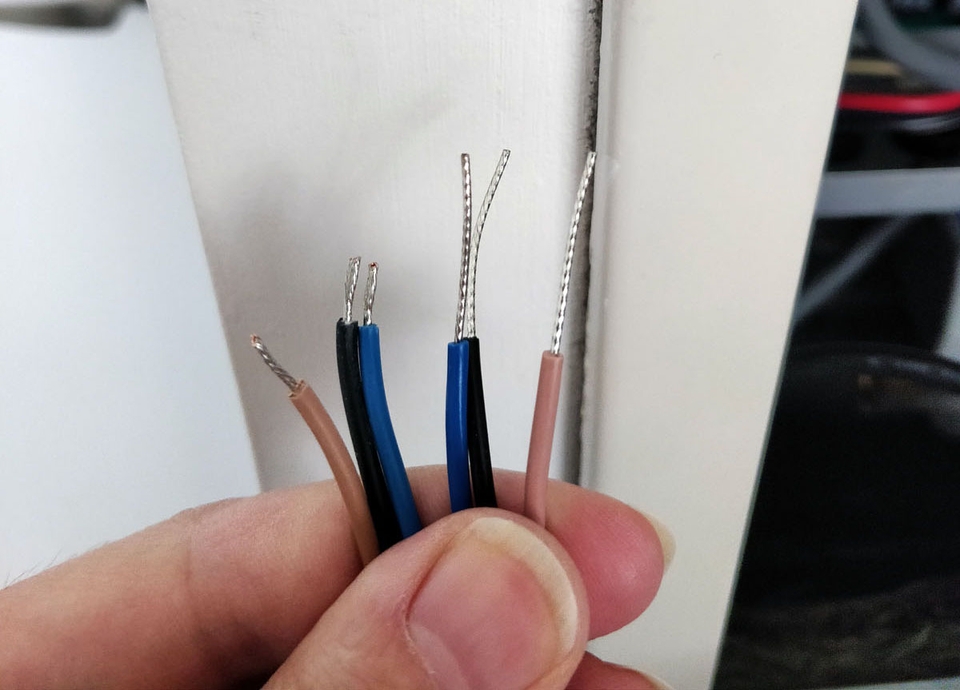 Feed the cable into the power panel. You may have to bend the cable a bit to make it fit. If you have the same connector setup as I do then leave just enough slack so that the wires can slide into the socket without tension or a bending pressure. Tighten the screws to clamp down on the wires. Double-check that you have the wires in the same order as before!!! Also, try to keep the actuator cable from resting on the water pipe since it can get really hot and may melt the wire. 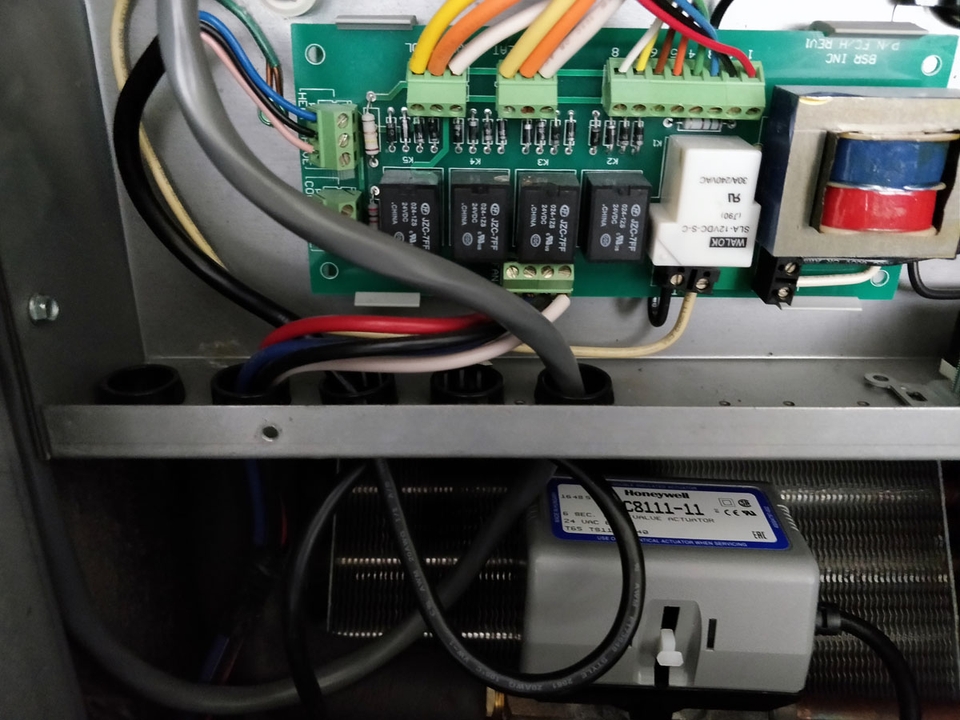 Go to your unit’s thermostat and make sure it’s in the off position. Now with the HVAC system left exposed, return to your home’s circuit breaker box and turn the fan coil power back on. MAKE SURE NO ONE TOUCHES THE FAN COIL UNIT WHILE POWER IS ON!. It might be smart to have someone else flip the circuit for you so that you can watch the unit for trouble. With the power back on, verify that nothing is on fire or doing anything obviously bad. If something seems wrong then kill the power via the circuit breaker and call a technician.

Now turn on the thermostat and set it to a temperature above/below the current temp. If you’re running heat then go above, otherwise go below for A/C. This should activate the actuator and you’ll see the white tab move into position. Mine travels fully down and opens the water line. If nothing happens then you may have a faulty unit or your wiring is incorrect. If it activates and your unit produces heat/cold air then you’re done! The last thing to do is to kill the power again, put the cover back on the power panel, and cover up the unit’s access panel.

Here a video of my HVAC being powered up:

That wasn’t so hard, eh? Hopefully, you didn’t run into any trouble doing this repair. Pat yourself on the back for saving money and learning something new. Now if you ever hear that loud banging noise again then you’ll know how to easily fix it.

I want to end this saying that I have nothing against professional HVAC technicians. They spent years studying this stuff and deserve to make a living. My problem is being charged a ridiculous sum for what boils down to a 5-minute replacement of a $70 part with a potentially short shelf-life. If I didn’t know that my broken unit just needed a new actuator then I would have had a technician look into it.